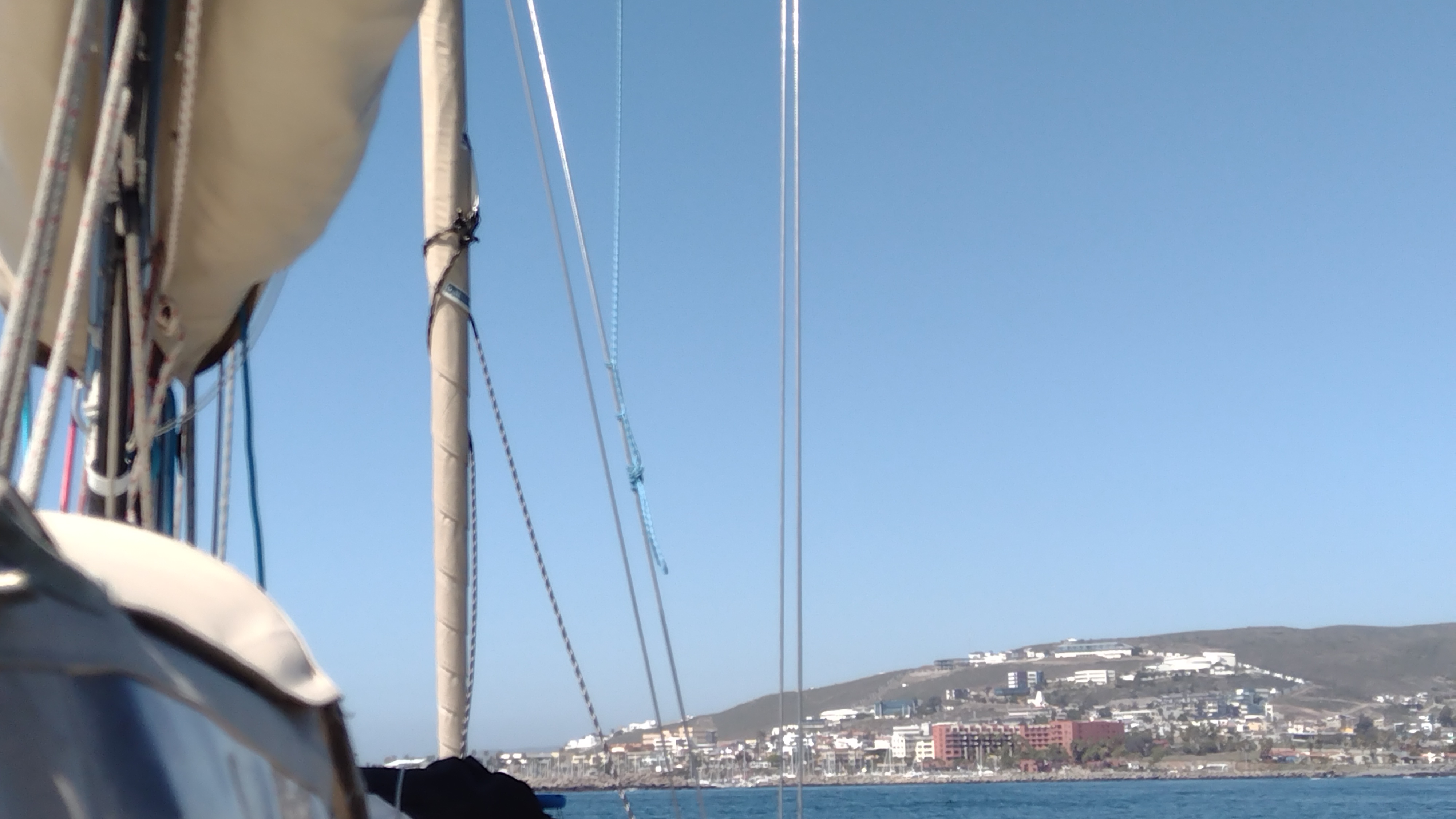 There was this story of slipping the lines, exiting a bay and turning left, that our good friend Graeme likes to tell in these words. Ensenada is also in a bay - it even actually means "bay" in Spanish - and after almost a full month at the shacky docks of Baja Naval Marina, we eventually managed to repeat the performance on Saturday, February 27th.

We had arrived in Ensenada after our rush down the US coast, and with a complicated administrative situation to tackle to temporarily import Tire-Bouchon in Mexico lawfully. We had opted for the monthly fee at the marina, which made financial sense after 10 days or so, which we were expecting to stay anyway. Having no real deadline to leave was a luxury we hadn't tasted in a while and that we consumed for our first week, happy to just enjoy the internet (to also catch up on a bunch of administrative stuff but not only) and the (relative) comfort of a dock and all the facilities that come with it. Not without a certain itchiness to depart again, we ended up sketching a list of upgrades for the boat as well as errands to run on our first Mexico stop, like getting a local phone line or figuring out provisioning or simply understand how things work around here. One more week and we had sunk into an Ensenada routine, trying to start our days at a reasonable hour by fetching morning drinks in a different place every day and work on our to do list after that. The more we worked, the more work seemed to emerge. Add to that, a little phone sacrifice to Poseidon, another kind of sacrifice to the God of turista, and three weeks had past, the to do list had been reduced to the strict essential and departure prep started to attempt to extract ourselves from this Mexico first cruiser stop that had already started to feel as a final destination. That is why, "slipping the lines and turning left" again felt like an achievement this time too, if not more than the first time in the San Francisco Bay where we didn't really have time to enjoy nor to realize, as we were already late before even starting!

So, here we were, exiting the Ensenada channel with the giant Mexican flag in our back at about 11AM (only one hour after our hoped-for departure time). Bound for Coral marina and its fuel dock, only a couple miles out, the short leg was enough to confirm that we had left our hardly acquired sea legs in Ensenada as we feared - or knew if we are totally honest to ourselves. Once fuelled up with diesel and 'un poquito' gasoline for both our engines, we departed for our first anchorage in Mexico, Bahia San Tomas, a 30 miles trip. Departing at noon now, and hoping to arrive before 6PM in daylight, we were nonetheless determine to sail as much as possible to save our precious fuel that wouldn't be available at the pump directly before Cabo San Lucas, almost at the Southern tip of the peninsula.

A close haul course took us out of the Bahia de Todos Santos between Punta Banda and the Islas de Todos Santos. We were able to make around 4 knots in an apparent wind of 9-10 knots. Not too bad, but soon the wind was dropping in the lee of the islands. We still cleared the beautiful but scary rocks of the Cabo de Punta Banda under sail, but as we fell off (the turning left part!), the wind from our stern was too little apparent wind to give us a nice speed. At 3PM, Yalçın, who was still trying to sail (the other crew having already given up to sea sickness in the Bay with a dark story of banana eaten by superstition to not keep on the boat but still given back to the Sea God right away), gave up and fired our Monsieur Engine (that's his name!) to cover the final 12 miles or so in time before dark. A large fishing boat passed us, confirming the says of our pilot book such that there was a safe channel between the Soledad rock and the Punta San Tomas, entrance of our destination bay. The green mountain landscape with rocks meeting the ocean made it all worth the sea sickness, which now at affected us both (a dark story of trying to tune a ukulele took the best out of Yalçın). As we discovered the cove with excitement and, most importantly, the swell on our back, the nausea gave place to focus: Dodge the patches of kelp, watch the depth, drop the mainsail, prepare the windlass to drop the hook, and finally find the best spot to set.

Puerto San Tomas is a little fishing village with houses perched on the hill and fishing barges moored behind the rock that provides shelter to the northern part of the bay by the beach. After a first attempt that ended a little too far to our taste, we opted for a spot fairly close to the barges in between a couple of patches of kelp.

With our anchor nicely set on a bridal and tested in reverse, we put the boat away (closing the sail bag and tidying the cockpit) and not without excitement, opened a beer to celebrate our first night on the hook in such a scenic location!