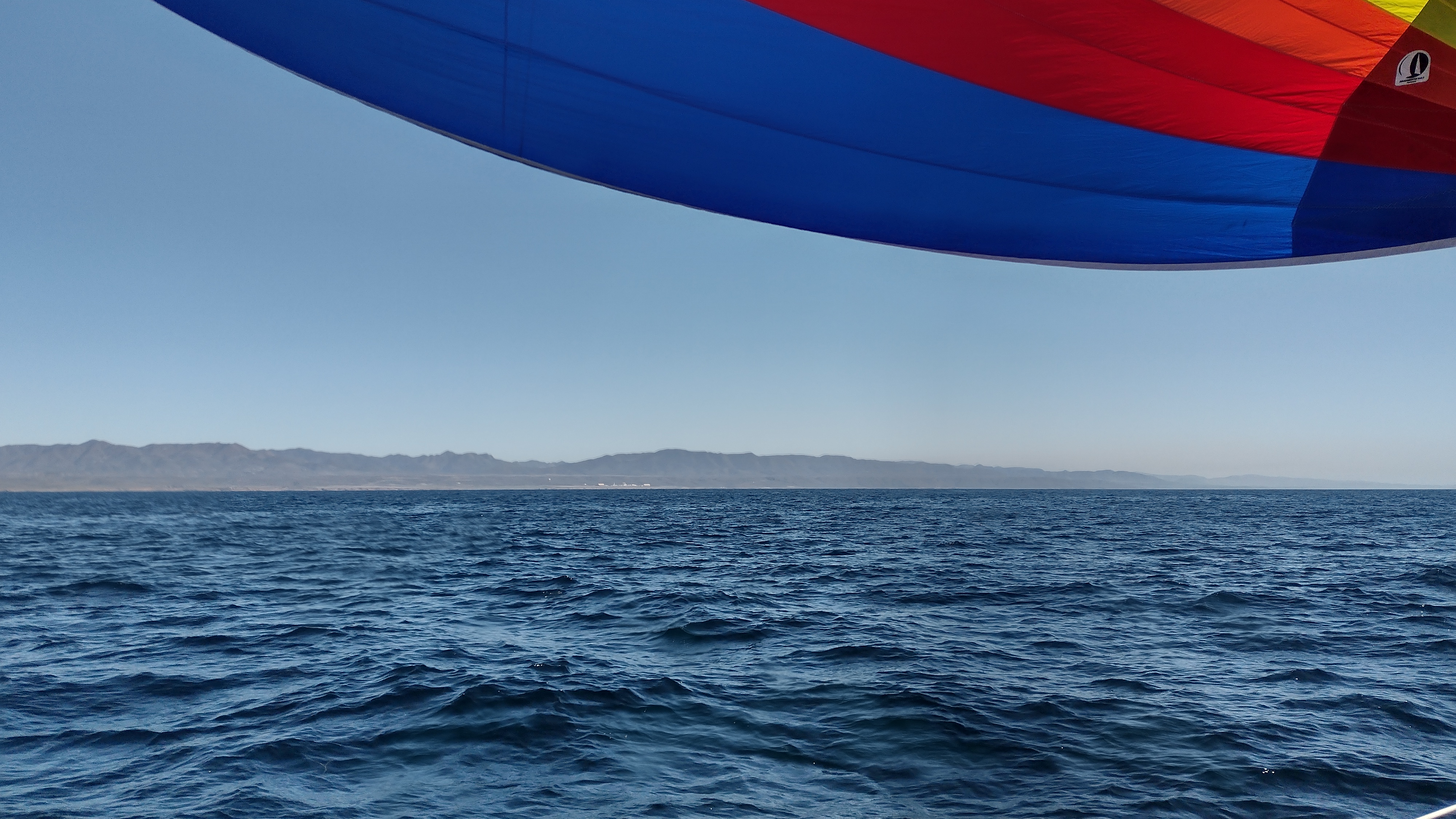 Despite my rant from the first night, we enjoyed our stay anchored out of Puerto San Tomas. Without internet or any other form of communication, wee spent a day there, out of time, trying to get our sea legs are the rythme of the boat rocking. We tensioned our standing rigging (the cables that hold the mast up) as they normally stretch after being replaced, which was our case in December, and finally enjoyed a little bit of vacation.

The next day after pancakes in the morning, enough time to be sea-ready, a little visit of dolphins in the bay and pre-rigging our spinnaker, we set off the anchor under sail. It was a first and went rather smoothly: after the first bit of forward motion, the small load on the anchor disappeared and we could pull it off. After a little game of dodging the kelp under sail, we were soon finishing to rig the spinnaker to make the most out of that little breeze we had been observing all morning.

Monday morning, spinnaker! This is as good as it gets!!

We truly enjoyed those couple hours making the most of that little breeze. No swell, sun out, quietly passing by a scenic coast. Images may speak up better than words.

We sailed close past two fishermen boats and exchanged warm"ola's". But after a couple of hours, the wind died out and we had to sock back our spinnaker despite me (Marie) trying to hold on to it as long as possible. Yalçın, though, offered an interesting alternative. He would jump on the water if I agreed to douse our colorful sail. After assessing that he was indeed serious and that this was after all one of the best no-wind activities, we promptly put the kite away excited about this first Pacific jump!

According to the jumper, the water wasn't that cold, but yet, he regained Tire-Bouchon quite promptly. A soaping later and after still persevering to try to sail, we fired up the engine to close the 5 miles or so to our destination of the night: Punta Cabras.

This little cove was very scenic, poorly charted as you can see from the Navionics screenshot of our anchoring location, and one had to anchor in somewhat shallow waters (6 meters) to get protection from the swell. As we sailed in, after realizing the cove want where it was supposed to be, it became clear why this anchorage is secondary. The protection wasn't tremendous, the space limited (2 yachts had said the pilot book) and we had to set our anchor twice before getting a good holding on the weedy bottom. A third time became necessary as we decided to also set a stern anchor to better align with the swell and limit the rolling which was quite significant, but bearable (ironically, more pronounced than our in the open though!).

Our "short" 20 mile sail from Punta San Tomas had ended up taking the whole day. So we appreciate a good meal and a rocky but correct sleep, interrupted at around 1PM by a little manoeuvre on deck under the moonlight. The rising tide and/or the entering north wind had unhooked our stern anchor and we had to go through the anchor setting choreography once more, but that stay all morning.

Previous post
Our first night on the hook, the washing machine!
Next post
Running away (and with) the South winds