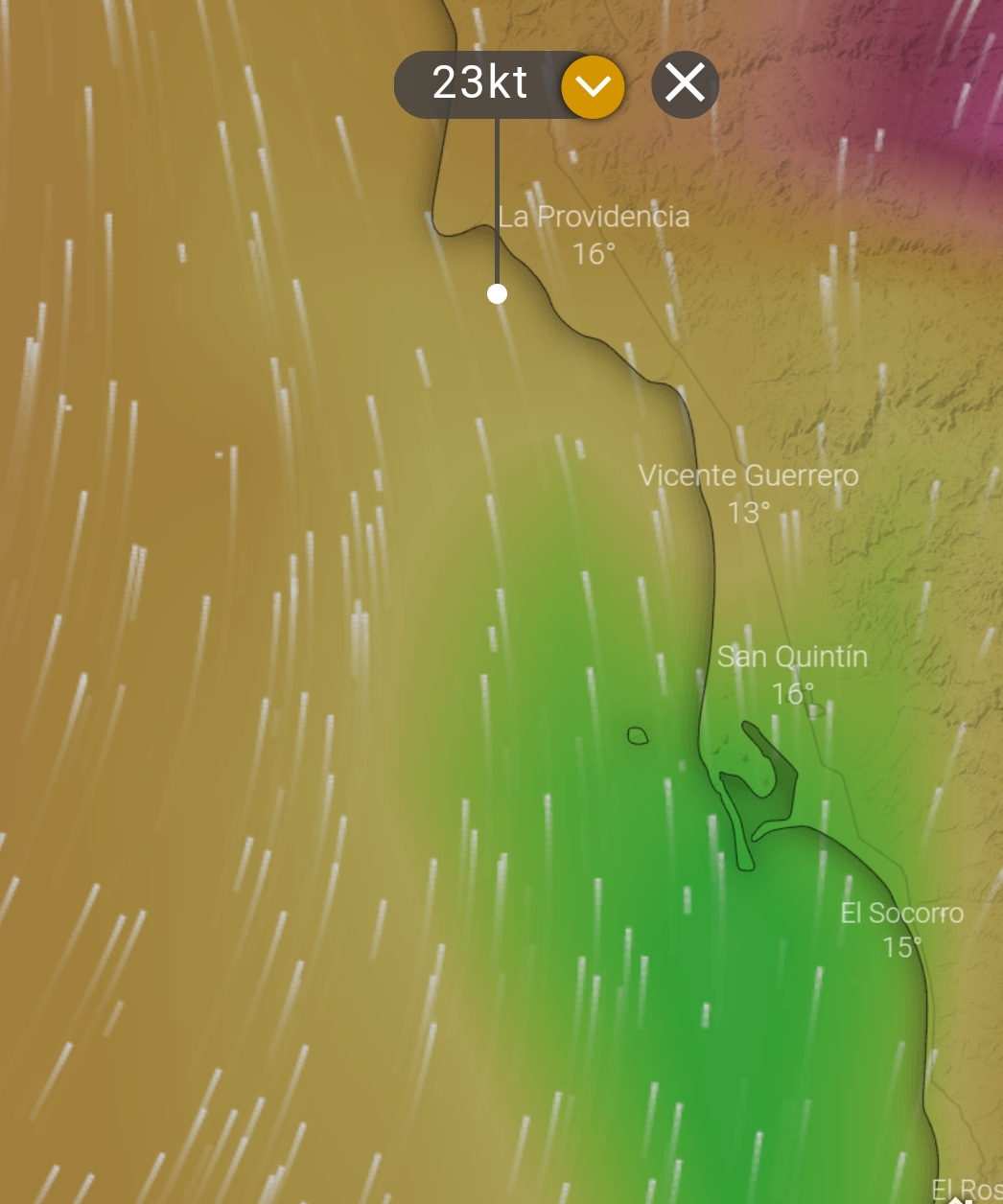 Sailing is all about having enough wind, but not too much, and hopefully in the right direction.

Along the Pacific Coast of Baja California, the prevalent winds are blowing from the North/North West direction, and luckily (or maybe because of that, I don't really know), there are a lot of more or less sheltered bays or coves to protect boats from that wind direction and offer a place to stop or wait out heavy conditions. Sadly, if the wind switches to the South, which isn't uncommon during winter storms, there are very few protected bays to take refuge. So better be aware before that is forecast and make your way to those before being caught out there in too heavy air.

Our first anchorage in Bahia San Tomas offered a welcome break from the city life: No internet. Sadly no news for our families except through the sat phone, but also no email or any stressful news. Also, no updated weather forecast. Luckily, making our way to Punta Cabras, we were able to catch intermittent coverage on our Mexican SIM. Unlucky, some South wind had appeared between Tuesday night and Wednesday. No huge deal as we got to know about it early enough, but actions had to be taken to reach the first protected anchorage for South winds on the Coast, Isla San Martin, another 60 nm south. No choice, we had to go there, but the wind had been shy lately and we were reluctant to motor all the way. So here was the plan: We would motor on Tuesday as there was no wind in the forecast and reach the half way point after 30 miles, Cabo Colonett. Our goal was still to arrive there before sunset as the place was an unknown anchorage. We would be able to rest a little before casting off during the night and hopefully get just enough of gentle South breeze to head to our final destination, Isla San Martin.

So we left Punta Cabras in the morning and as expected, had to motor most of the way. The sea was flat, the sun was out and the view of the mountain landscape passing by made up for the noisy ride. All sailors cherish the silence that follows turning off the engine when the only remaining sound is the boat breaking the water. That didn't happen. We did try to set the sailed a couple of time but the speed was never enough to carry is to our night destination, so It vaillant Monsieur Engine never got turned off.

The sight of Point Colnett, renamed Cabo Colonett by the locals (in spite off being an English name - we adopted the local name right away though as it's more fun!), made up for the day. The round plateau with cliff falling into the sea offered a gorgeous sight as we were passed by several fishing boats, probably headed to San Quintin. We also spotted another sailboat on the horizon motoring along as well. We were right in betting they were also running away from the Southerly, as we met them the next day in Isla San Martin.

We set anchor at sunset behind Cabo Colonett, feeling so privileged to be able to enjoy this location of only for a couple hours. After a quick dinner, we went to bed for a couple hours to prepare for the long and possibly rather windy night.

Our alarm set off at 21:30. After snoozing for a little bit, we had instant noodles to warm up, geared up for the cold night shifts and lifted our anchor. The South breeze hadn't settled yet, so the engine was doing the heavy lifting still. More than a half moon had risen given us some light. We started talking shifts. I (Marie) went first as a Yalçın motors uneventfully for three hours. At 3AM, I woke up just in time to hear the engine stop and the more subtle sound of water flowing the hull. Good news! Some Southerly winds had come in and we had covered enough ground to "afford" sailing without arriving too late to our protected destination. Actually, we had to slow down to arrive there in daylight.

So I took over for the fun part of the night, as Yalçın went down in the cabin to get some rest. He had set up the main with one reef in (never too cautious when waiting for Southerly) and a full working jib. So I started the fun game tack into the wind to reach our island. You can't sail directly into the wind, right? Otherwise, it would just pushed you backwards. Sailboat can at best make progress about 45 degrees to the wind and therefore zigzag to there destination if they are located directly upwind of themselves. The funny part that night was that the wind seems to hold on a narrow corridor. You would make good heading on your tack before being headed as you exit this narrow corridor (see the track). The wind was probably funneled between the land and the island that we had in sight since the beginning of my shift.

A gentle upwind makes for gorgeous sailing despite the zigzags ad you can feel the wind in your face and the boat heeling over in response to the wind. It's almost intimate. I steered the three hours that brought us close to our anchorage, enjoying every seconds, playing with the moon which would appear and disappear with the clouds. You can make better upwind progress (towards you destination) hand steering, pinching a little into the wind once you picked up enough speed. The whole story is to not be too greedy because of you pinch too much, your sails start laughing and you loose all the speed, have to fall off again which messes up your nice upwind angle. A nice race against the ETA time on the chart plotter in 15 to 20 knots of winds (I furled a touch of jib to reduce a little bit of sail area and improve the heading with a main fully trimmed) and a flat sea. It doesn't get much better than that.

The sun rose slowly being the volcanic cones of San Quintin and Yalçın steered the last couple of miles toward Caleta Hassler, our refuge cove. The island was a beautiful volcanic formation covered in green vegetation nonetheless. The boat we had seen earlier was already at anchor there and fishermen pangas were moored in the bay. We finally saw the lighthouse that had guided us to there and the natural breakwater that would offer us its protection in a couple hours.

We had to set our anchor twice to ensure good holding and after a well deserved bacon and eggs breakfast prepared by Yalçın, I went in to catch-up on some sleep (finally in the V-berth that wasn't slushing for the first time since we left Ensenada!!!) while Yalçın resume coding for an upcoming surprise on the blog!