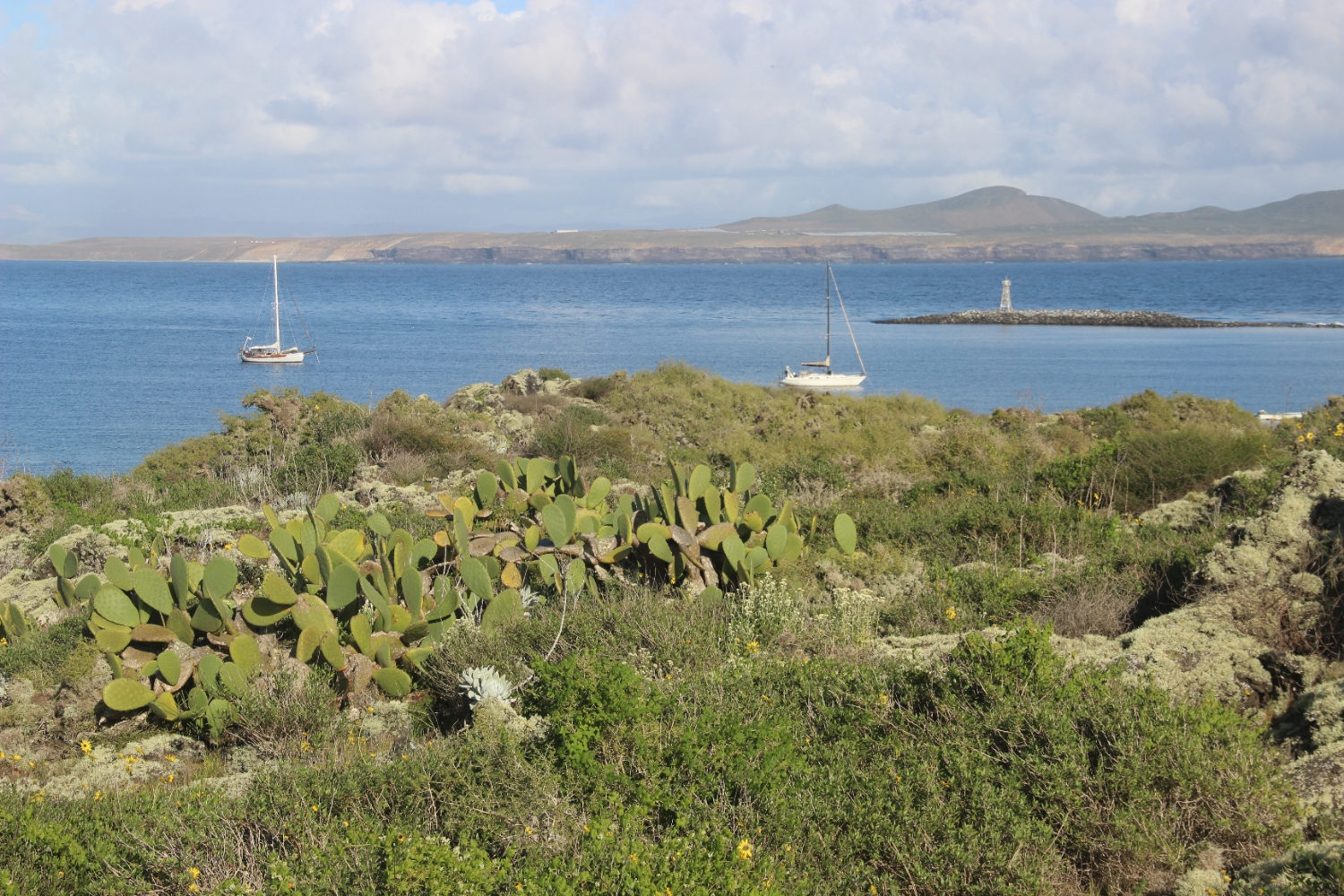 We had come here to take shelter from South winds building up in the morning of Wednesday, March 3rd. Thankfully, we had made it to the cove before those winds reach unreasonable strength, and to be honest, it was so nicely protected that the winds in the morning didn't feel that terrible. I must mention that I (Marie) was catching up on some sleep in the V-berth while this all happened, so my experience might be a little biased: I only remember a couple of gusts which woke me up by vibrating the halyards on the deck, nothing comparable to the winter storms we endured in the Berkeley marina ("it's a gale!!"). Yalçın though saw white caps on the horizon past the island and declared our anchorage was nicely sheltered. We must admit that it was, by far, our flattest anchorage so far, a delight! First sleep back in the V-berth (without the slushing)!!

After a nice lunch, we decided to gather our motivation, inflate the kayak and paddle to the beach to explore the island. We disembarked to find a sign indicating the Ciudad El Lugar, composed of a couple buildings, the dorms and living spaces of the fishermen. A couple of them were present and waved friendly greetings in the distance; we were trying not to invade their space even though the boundaries were pretty unclear - in these times of COVID we wanted to respect if they didn't want to have any contact with outsiders. But we might have looked kinda lost, walking uncertainly in the direction of the lagoon on the other side of the island (there's apparently another anchorage there that we wanted to check out) not really finding any trail, that one of the fisherman came to us. His name was Ismael, he spoke a little bit of English and asked if we were trying to reach the lagoon. "Laguna? Sì!" Between our broken Spanish and his broken English, we got a nice guided tour of the surroundings and plenty of information about the life of the fisherman community. Ismael was living partially on the coastal town of San Quintin and partially here, in San Martin for fishing. He much preferred the slow pace of the life on the island though, he told us, than the craziness of city life. It's not without a certain pride that he showed us the beauty of the island, which started with a pound of sea water infiltrating through dark round lava rocks really close to their camp. "Wait! You can't hike with flip-flops, you need sneakers because of the cactus!" Luckily, we had taken ours and switched shoes as he, and his fishing partner Rodolfo who had just joined, waited patiently for us. "And no, no, keep the camera out for the lagoon!".

We walked a few minutes more to discover the lagoon that was rather small (at least compared to what I imagine when someone says "lagoon" - too many Youtube videos ^^) but the beach was covered in seals lazily drying in the sun. As we approached, they all rushed into the water, we weren't sure if our presence triggered that or if it was something with the waves or tide, and sadly, I didn't manage to ask our improvised guide who declared that "he had too little English and I had too little Spanish to understand each other perfectly". Fair enough! No need to understand why the seals jumped to enjoy the playful ballet they were offering us: younglings playing in the waves in groups or surfing in and out of the lagoon entrance. Hard to capture in pictures or videos but here is a try.

Ismael had another place to show us. He could guide us today on a 20 minutes walk to a place we didn't really understand, but if we wanted a longer walk, we would have to come back tomorrow by ourselves as he would be working. Also, he had to stop by the houses to swap his fishing boots for sneakers. We were invited in the yard, and met the rest of the fishermen on break that day. Two more gentlemen. And "where were we coming from by the way?". "Wow, France and Turkey!", we gathered they found that original. We were offered to try the food on the table, a sort of seafood ceviche. I'm not a seafood fan but politeness indicated I must try it. It turned out mostly spicy but delicious according to Yalçın, who is a better seafood referee than I am. And off we went, with another fisherman rushing after us to show me a YouTube video with a blond chick that was speaking in Spanish but was French, "did I know her?" She didn't ring a bell, but the intention to connect was touching.

We started our little hike uphill with Rodolfo as escort - I don't think he spoke a lot of English which made him shy to talk to us - and Ismael as a guide, on a path we would have a hard time to follow on our own, despite the cutest "Sendero" signs (path or "sentier" in French, I guessed) we had ever seen. We were thoughtfully advised about small cactuses along the path or bigger ones that give juicy fruits in the summer. The fruits were already forming and named "tuna" which made it difficult to understand (we thought the discussion was about fish for a while!) before Ismael pulled up a picture on his phone for us.

While ascending, the view on the cove became more and more pretty, with Tire-Bouchon and the other sailboat anchored in the scenary. "And which one is your boat? Does it have an inboard or outboard engine?" We returned the question. Ismael's boat had a diver painted on it as he was taking care of tourists who come camping on the island in the summer - which explained why he was such a good guide! He would take them snorkeling and spearfishing in the cove "of course with wetsuits, the water is super fresca!"

Our destination ended up being a cave in the volcanic island. Apparently, you could follow the underground corridor for twenty minutes and pop up somewhere else on the island. He couldn't do it with us but if we had time to come back tomorrow with a light, we should totally do it. The truth is neither Yalçın nor I were very keen on the idea of crawling in the darkness of an unknown cave in a remote island. We diverted the conversation with a loud "maybe" and question about how to reach the top of the island. It would take a while as the "sendero" was ending here and one would have to go back and forth until they find a suitable way through the cactus. Some pictures were taken and we started going down.

Once on the beach, shells were huge and not broken unlike on the beaches of France where you wonder where all those souvenir shops get their supplies from. Ismael knew the drill, he explained how to clean them to reveal the shinny part and laughingly suggested I write "Isla San Martin" on it once it's cleaned. Who needs a souvenir shop here!?

We should come back to their camp if I was into shells, he had two big ones to give us but they'd have to be cleaned. The two other fishermen were there too. Ismael asked the name of our boat. "Tire-Bouchon" was first understood as "tiburon" which, we had learned that same day when we'd stumbled upon the bitten corpse of a dead seal, meant shark, and not only a city in Marine county in the San Francisco Bay! Now, we wonder what Sausalito stands for...

We managed to explain what a tire-bouchon is and that the name pronounces similarly in Turkish and French. The bottle of "vino" part of the conversation caught the attention of another fisherman who was suddenly interested in knowing if we had wine to share. Oupsy, only one bottle left and a gift from Marie's former colleagues, but we could share beer if they wanted some. They did. Did they want us to paddle back to the boat and have us bring some beer back? Misunderstanding was leading to embarrassment and this beer story was a little bit ruining the genuineness of the encounter, but we had beer, they didn't, we'd be happy to share some, "should we come back?". Once more Ismael saved the awkwardness. "I want to go catch fish for you tonight. I'll be back in one or two hours." He was entirely geared up already and the other fishermen were getting there too. He would stop by our boat when the fishing was over and in the meantime, we should definitely check out the point that extended passed the beach, "it's walkable at low tide and beautiful".

We said goodbye for now, slightly relieved that the awkwardness had lifted so easily and walked a little bit on the beach, only the two of us. Rounds lava rocks were meeting the sand and even the last stage of a fiberglass wreck, a surreal landscape!

When time came to paddle back, we found that one side tube of the kayak deflated. Bummer after spending so much time working on the other dinghy, we'd now have to work on the kayak. Oh well, at least our ride home was still afloat and work on our equipment is a big part of boat life anyway.

An hour or so after being back on the Tirb, we saw our fishermen's panga enter back I to the cove. They fished a little more here and there and headed to our stern happily (meaning full throttle). "By the way, should we put fenders out?" But, unsurprisingly, their docking was perfect and two fishermen were holding on to our boat while keeping a distance. Ismael at the helm asked us if we preferred a fish for filets or for frying. When we replied filets, he pulled out a huge white fish from the bucket. Yalçın, who had been charged to get our pick out of my cowardice to handle almost still living beings, asked for a smaller one. He took the fish as I handed 4 beers in exchange that were not asked for. While the other fishermen opened it right away, Ismael, our guide of the day, departed to their mooring a couple hundred meters away. He had definitely offered us more than a fish, our first unforgettable memory of this cruising trip!

We still had a fish to fry though, as the (or at least a) saying says. And when I asked Yalçın if he thought the fishermen realize we had little clue about how to prepare their catch, he replied that they probably saw it at the uncertain way he grabbed the fish. It is true that it was our first time having fresh fish on the boat. I'm entirely useless in that matter and borderline grossed out by cutting out the full animal, Yalçın had watched a couple of videos. He wasn't super happy about how the filleting turned out, but I, if not for the bones that remained, was already pretty impressed that it worked well enough for us to have fish on the table for dinner. A new beginning, or is it yet? The fisherman in chief onboard said we needed to get a detailed book first to learn the ropes of fish preparation before repeating the experiment. Fair enough, but for now, bon appétit / afiyet olsun!

Previous post
Running away (and with) the South winds
Next post
Fair winds and following seas on a self-steered boat, our first Baja bight