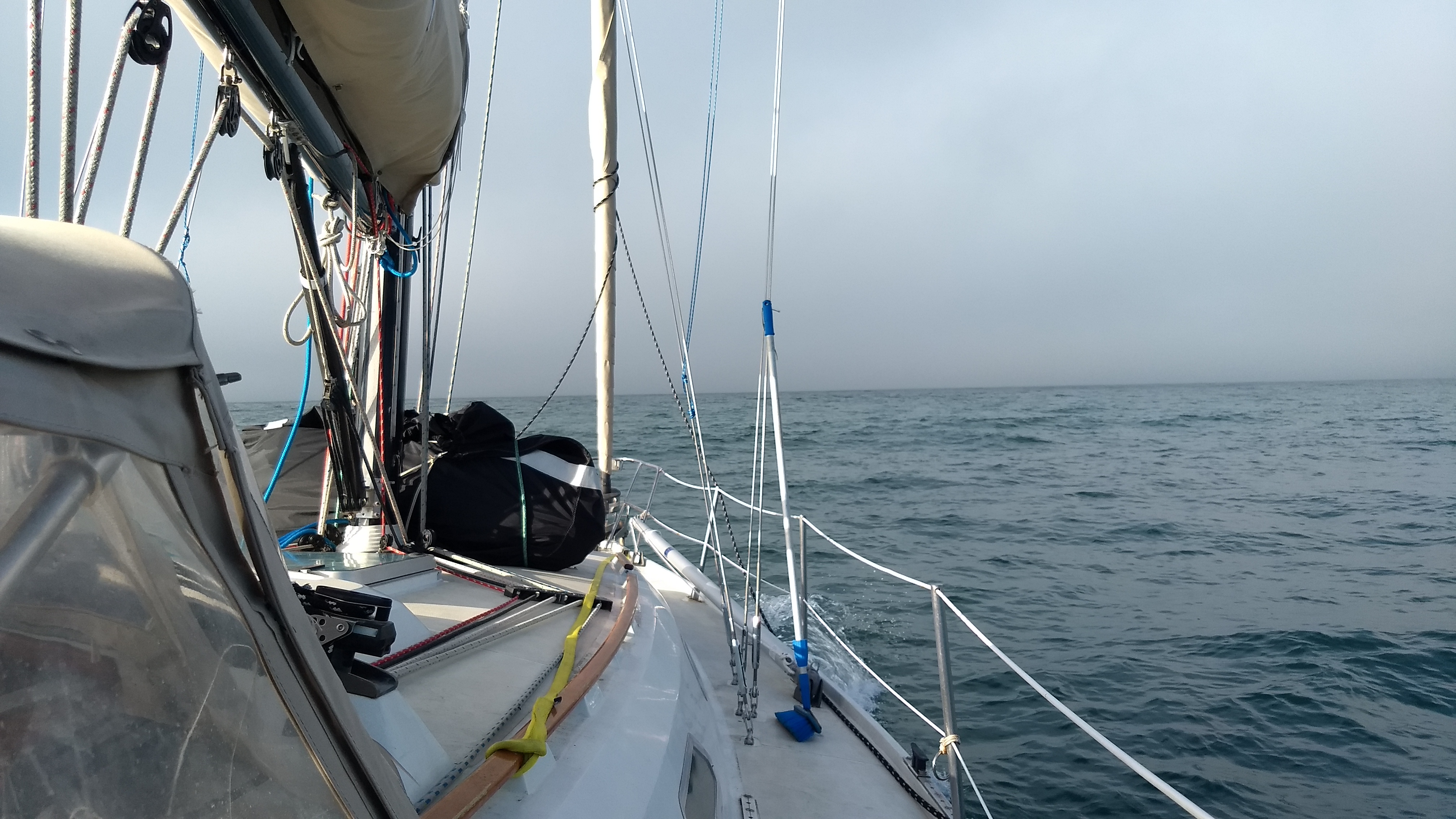 For those who are not familiar with Janga, it is game where you build a wooden tower with all the other players. As more and more players play their turn, the balance of the tower gets more perilous and you keep hoping that someone else collapses the tower before it is your turn again, which entails taking a little wooden piece out of the base and placing it on top of the tower, making the structure more precarious everytime.

Janga is also a game we played for Christmas and while we were sailing on January 15, in a transient big weather, this is exactly how we felt. Each of us hoped it wouldn't come back to us as we took shifts to hand-steer the boat in a pitch black windy night. How did that happen given that we have two autopilots on board you may ask? Let us tell you the story of leg 4...

After taking a rest at anchor and emptying the waste tank in Monterey's harbor, we departed again around 2:30PM to finish our trip to Morro Bay. Contrary to the day before, the fog was coming in and with little winds, we had to motor outside the Monterey Bay, into the fog. Once a little out, we manage to get a little breeze to fill our sail and relieve our Monsieur Engine.

What's next then, since we now have a boat without any canvas on? We can run with the swells and the wind: it is called running under bare poles and it's a storm technique. Pros: the boat is slower (an average of 3.5-4 knots) - which may not be a bad thing in a dark night, we won't have to deal with any sail if the wind keeps increasing and our course is a dead downwind course too, so we can actually make progress towards our destination. Cons: having no sail to generate lift (forward moving against the wind direction), we have limited manoeuvrability and last but not least, we cannot engage any autopilot. That's a huge one! We need to hand-steer in this challenging weather. It's not question for Yalçın to go to bed in the cabin anymore. He takes a blanket, wraps himself in and try to get some rest in the cockpit despite the boat going up and down the wave. We are both tethered in the cockpit. I take the first steering watch, it is 8PM.

When the night came in, a little later, Marie had had time to rest in the afternoon but Yalçın had not. Thinking about starting our shifts to give him some rest, we decided to take a reef for the night (safety measure and the wind was forecasted to pickup). Once the manoeuvre executed taking advantage of all hands on deck, we realized that the wind had picked up even more and even with our jib furled, we were overpowered and the wind was rounding us up in the swell. With further more winds, we needed at least to take the second reef, that's when we realized that the tack line of the reef had tangled at the mast level. Either one of us had to go (tethered to the boat, of course !) or the other option would be to douse the sail entirely. We chose the later knowing we'd still need to go to the mast to help the sail drop in its bag properly - but aware that after that, we would not have to go again. Winds was a sustained 25 knots - nothing we can't handle in the Bay, but in a foggy dark night with swells in our back, it's another story. The wind was howling in the rig as I (Marie) headed the boat up as much as possible without a headsail and with a depowered main. I could barely get more than a beam while Yalçın put the main sailing in its lazy jacks as best as he could - at this moment, I realized how much this lazy jack system, supposed to be a convenience, is also a matter of safety - I'm so glad we didn't have to wrestle on deck to flake and tie the sail to the boom!

Everything was black around me. The only thing to steer to is our instruments - a real video game!! Rule 1: Align the boat with the wind using the wind indicator arrow on the navigation pod display. Rule 2: Once that course is stable and you have enough speed, steer slightly to port to align the boat route to the GPS bearing, a red marker on the chart plotter screen. Waves were invisible, which was probably best as they would likely terrify us. From time to time, a white cap would break at the top of the wave. The bioluminescence lit it up in the corner of your fiel of view, a welcome warning to anticipate a correction at the helm.

It was scary, brought in sea sickness and it was cold at the helm station with little sprays and strong winds on our backs, but it was manageable. We took half hour shifts, one under the blanket, one steering. We saw regular 30+ gusts on the wind meter and each time the weather seemed to diminish, it picked up again. We knew that wind was supposed to pass withing 3-4 hours, so we took shift after shift, hoping that would be the last. Janga time!

After 3 hours of intensive steering, we reconsidered the first idea of Yalçın which was to unfurl a little bit of jib. It might allow us to gain more steerage and set a steering system. On the other hand, if we got too much out or if we broke the furling line, it meant one of us would have to go to the front deck to take down the sail, flake and secure it to the deck: Not ideal in a pitch black rolly night. But meh, if you don't like your current situation (and we were clearly done hand-steering), you gotta come up with something else, right? So we gave it a try and it all went fine - thank you trustworthy boat! With a little jib, we were also able to make progress a little more towards land (generally less wind) and go faster in general (and hopefully faster outside this windy patch).

With these new settings, I went down below to rest. Soon after, Yalçın managed to set the autopilot to steer us a little closer towards land. Around midnight, he came down to announce conditions had calmed down *relief* and that I could sleep two more hours before taking my shift. Not so long after, he had to fire up the engine, the wind had really past and Madame la Mer had calmed down her anger.

An overall humbling experience: some lessons were learned, some confidence was gained too, but shaken at the same time. Experience had definitely been acquired!

The rest of the night went smoothly as we took our shifts and watched the stars now back and gorgeous in the darkness of the night. The next day was mostly calm and sunny, with a couple opportunities to put the sails up. Our stomachs still a little upset were happy to arrive in Half Moon Bay in the beginning of the afternoon. The port entrance was wavy but we had been there before and gently surfed our way in, following the markers. Back to one of our favorite places on the coast, with its welcoming sea otters, a bunch of people out in kayaks or paddle boards and soon tied at the Morro Bay Yacht Club for the night, with the a good shower in perspective!