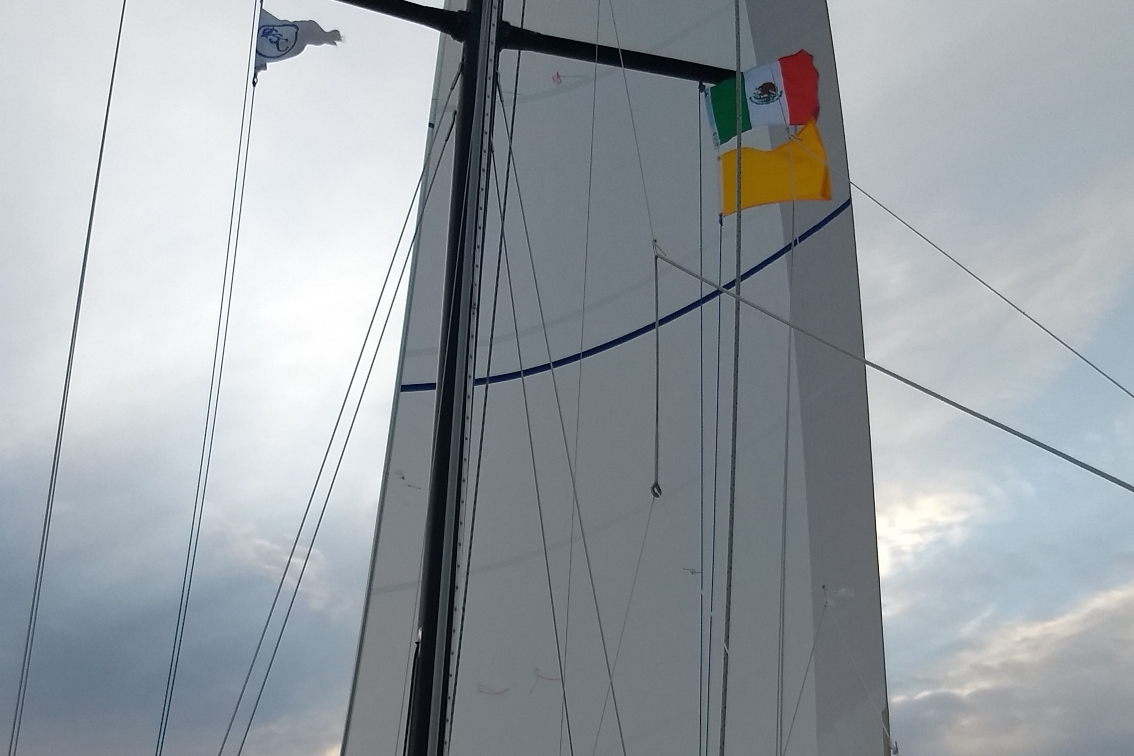 At 8PM on January 30th 2021, we crossed the imaginary line that marks the maritime border between the USA and Mexico! A moment we had dreamed of for a while, but feared as well. Indeed, we had to leave in time for me not to overstayed my visa's 30 day grace period; Tire Bouchon had also been checked out by the port of LA's customs and had 48H to leave land.

Past this line, the unknown and adventure awaits, and this is what we came for. In a way. We started to realize and get excited as we hoisted the American flag that Tire Bouchon has to display to signal his nationality when overseas. Later in the night, same excitement despite a little more fatigued, we hoisted the courtesy flag of Mexico on our starboad spreader, along with the yellow quarantine flag, which signals that we haven't cleared the customs yet (nothing to do with coronavirus quarantines!).

But let me start at the beginning of this journey. After sad goodbyes to Pınar and Ramin in the morning (Yalçın's sister and brother in law) and a delicious Turkish diner the evening before, we had arrived to the boat, on his mooring in Redondo Beach, and were getting ready to leave. After a fairly active week running around in LA for parts and administrative procedures, we lazily took our time before going at sea. The departure got postponed from the morning (it was the plan the day before), to lunch time, to the afternoon and finally to around midnight. That way, we would start at night, yes, but we would only have one shift each which wasn't the end of the world and would allow us to arrive on Sunday. That gave us plenty of time to prep the boat, prep underway food and most importantly, prep ourselves: we needed to get back into a sailing mindset and rest a little after a busy week.

Around midnight, we were ready to cast off. One last trip to the pump out dock to refill our water tanks and empty our waste tank and we should be really to head out for good. This pump out dock was a smelly floating platform with no access to land what so ever. Funny to think that this was the last piece of US territory we landed foot on before the expiration on my visa. It was entirely colonized by sea lions when we approached. Luckily, our light was enough to scare them away - no sure what we'd have done otherwise as we really needed some water! - and we run our errands before leaving the nice shelter Redondo Beach had offered (both from a storm and from "unfriendly boating conditions").

The swell had calmed down since the storm and was now gentle and nicely spaced. The night was light up by a close to full moon, an entirely different vibe compared the beginning of our journey (pitch black nights!). Both of us stayed on deck for a little while as we were rounding the Palos Verdes peninsula, just south of Redondo Beach. No wind, easy motoring conditions and autopilot steering us towards Catalina island, we were ready to start the shifts for the night. I (Marie) went first, just to miss some container ship action that Yalçın had to dodge with the help of the AIS (Automatic Identification System). This device displays the position of neighboring who have an AIS transmitter (container ships, some fishing and pleasure crafts but not all). In areas with a lot of traffic, like the shipping channels leading to large cities like LA or San Francisco, this is definitely useful, especially at night or in the fog (SF represent!). More than spotting the vessel in advance (which you can do in principle with the navigation lights at night), you also get the ship's size, heading, speed as well as closest point of approach. If you decide this is too close for your prudent taste, just alter your course to increase that distance - which only works if they keep their course.

When time came for my shift, the sun was rising already on a glassy sea, the cliffs of Santa Catalina island and the silhouette of the San Clemente island. Beautiful colors...

This last day in US waters turned out to be sunny and lazily: the Engine taking us south on the most direct path to Ensenada, Mexico (we had to cancel our stop in San Diego since visa time was up), the person on shift just having to look at islands and ships passing by.

On Yalçın's afternoon shift (we kept snoozing the entire day, three hours at a time), the wind picked up enough to raise our sails and offer a well deserved relief to our hard-working engine. In 12 knots of wind, we were making a more than acceptable 4 to 5 knots, and we were in not rush as we didn't want to reach out destination during the night anyway.

Before the night, we used some time together on deck to install our mandatory national ensign. To signal Tire Bouchon's nationality (ironically different from both our nationalities), we tied an American flag to our backstay as we were getting closer to Mexico waters.

The sun set with San Diego (Tirb's previous home) and Tijuana in sight. I took the first shift this time and got the ship action. This US Navy Warship 92 (their name is always intimidating! Who wants to mess with a war ship?) kept setting off the AIS alarm no matter how hard I tried to avoid it (you don't want to alter your course too drastically when under sail to minimize manoeuvers, and you technically have right of way), as if it was trying to sail to us (we had been border by the US Coast guards in that same area when bringing the boat from San Diego to Berkeley). The lights of Navy Warship 92 eventually disappeared (no way, was it a submarine?), only to reappear showing that it had crossed in front of us and was now heading to San Diego. The multiple alarms had woken Yalçın up, in time for some border crossing. We sat there, ready to celebrate the milestone. It took us a while as the wind was lowering (once more under the impression that Tire Bouchon was reluctant to let go of his (former) home - he did the same under the Golden Gate bridge believe it or not) and many repetitions of the Many Chao song Welcome to Tijuana that we played on repeat.

We eventually made it and that's when the excitement finally kicked in! We had been in such a rush this past month, always on the move, focusing on managing to cross this border in time. People seeing us leave were oftentimes more excited for our trip than we actually were. Our minds were simply not there yet, we would see all the challenges leading to this moment. But there was no excuse anymore the border was there and... We crossed it! Just like that (how stupid and arbitrary are these lines when you think about it - pure inventions of the human mind and societies).

We kept going for a bit, finished the Manu Chao album, and resumed shifts again.

Later in the night, the wind died and we fired up our "iron sail" again. At sunset, we hoisted the Mexican courtesy flag along with the Q yellow flag and approached the Bahia de Todos Santos.

Once more, the sunset was gorgeous behind the mountains of Baja California. Once inside the Bay, the wind picked up for us for 15 minutes, just enough to make 4 knots jib only and go back to our less eco-friendly propulsion device.

One hour later, we had found our slip in Baja Naval marina, chatted with other cruisers who offered a warm welcome to the dock (what were the odds that the first person who talks to us is a French guy, seriously?) and learned that the office was closed for a 3 day weekend. The tacos had to wait a little longer...