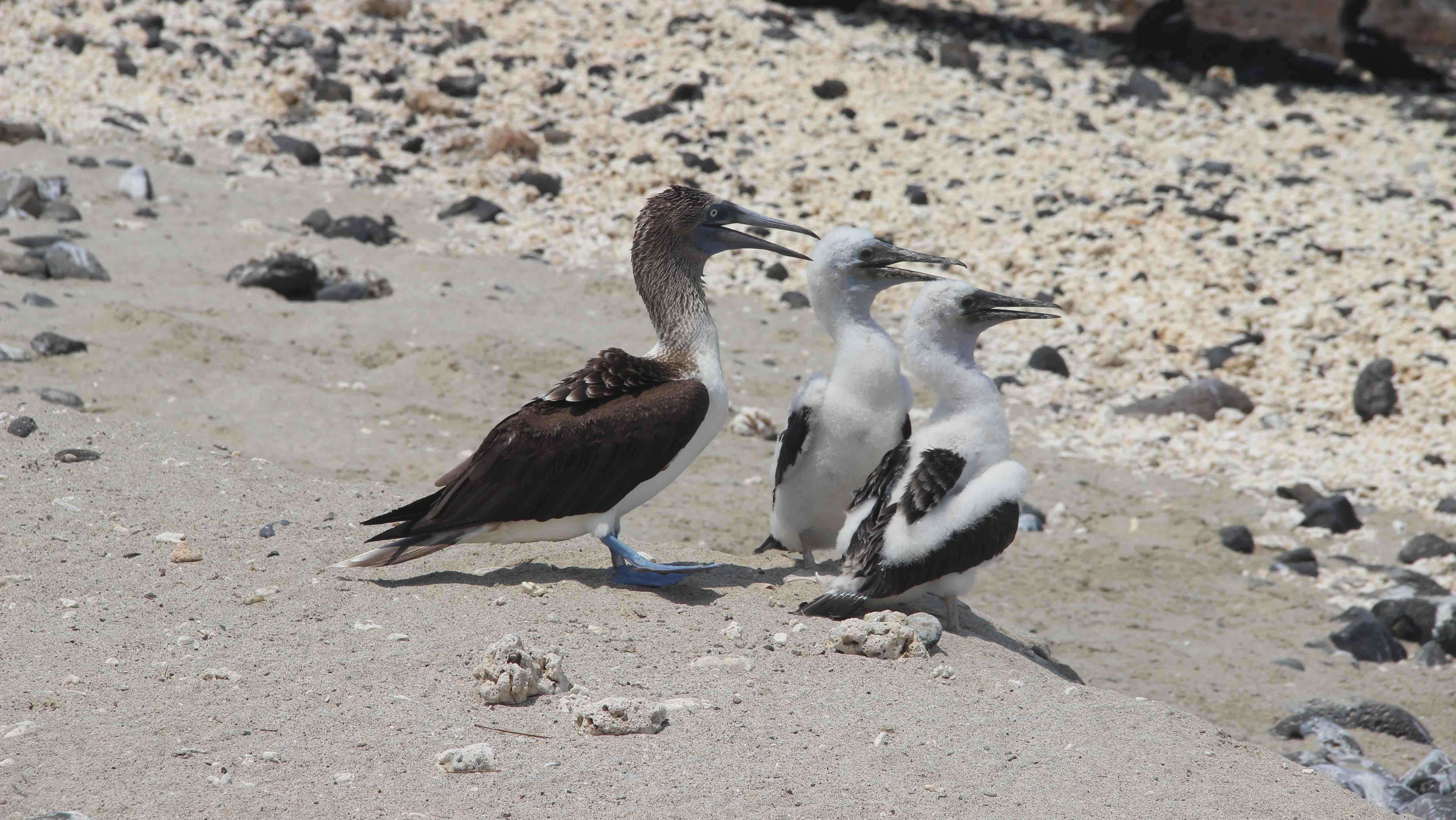 Isla Isabel, also know as the Galapagos of Mexico, is a Mexican National Park and a world-heritage site. With such pedigree, we had been longing to discover this island for a while! Like the Galapagos, the island doesn't count any large mammal predators and for that reason, it is home to a large colony of seabirds who are pretty much unafraid of humans, one of them even tried to intimidate Yalçın! A research station was once active on the island, and part of me was hoping it still was, despite unencouraging reviews and a lack of recent information about the research linked to the island on the internet (but my Spanish could be at fault here).

Despite the heat that had been taking a toll on us since we set anchor by the island, we paddled the kayak to shore in order to explore the island and meet its inhabitants, and in particular, the intriguing blue-footed boobies!

In the transparent waters surrounding the island, landing the kayak was a breeze. We walked it up on the beach and left it upside down, worried that the beach inhabitants, which were prudently looking at us and getting out of our way, would take upon them the task to whiten it a little. The sand was unbearably burning our feet so we had to put our shoes right away not to start running in circle and yelling in pain, which would have been a regrettable (and ridiculous) representation of the human presence on the island! Indeed, what was striking at first, was the number of birds and their lack of timidity. It is rare enough that animals are unafraid of humans that it gave this weird impression that we were not the dominant species on the planet - which may be a fake impression anyway but that's another debate...

Blue-footed boobies were here! And they were... blue-footed! Like a Warhol painting, they looked very trendy with their blue feet assorted to the surrounding of their beaks, but quite surreal! Kinda like a joke! Especially when they would start to walk with their way less fashionable duck-like walk. On the beach, there were youngs too with puffy hairy feathers. The majestic frigates that we had seen in the sky for a while now were here too, but slightly back where the beach meets the trees. With a more agressive looking beak, they definitely looked less friendly than the boobies and less beautiful than in the sky. Not sure where to walk in order to disturb these guys as little as possible, we started walking to the North of the beach hoping to find the trail head that was supposed to lead us all the way to the South side. We were curious to discover the other and supposedly main anchorage of the island, that had a reputation of swallowing anchors in its rocky bottom. In addition, the research station was supposed to be there and I hadn't entirely lost hope yet.

We passed in front of a camp of friendly campers who waved at us welcomingly. Their camp was nicely shaded by the trees but a solar panel by the rocks betrayed their presence. We will never know if they were tourists or researchers, but we had seen that some birds were marked by a ring on the foot or a mark on the head. We found a trail signaled by blue ribbons on the trees.

It lead us North along the water and then inland among the trees where we could see the boobies hanging out in pairs, nesting on the ground or in the trees. Their sound was surprising. Frigates were nesting their youngs too and would look at us walk past suspiciously.

We then reached the lake. Isabel is a volcanic island and the former crater is now a large lake filled of green water. After that point, we wondered several times whether we should keep going and try to reach the South side. The heat was overwhelming and despite the trees, there was little shade. With a lot of water and Yalçın's contagious enthusiasm, we kept following the blue ribbons to finally arrive to a rocky staircase guarded by red iguanas. We had seen a couple on our way and a bunch of little lizards, but this seemed to be their favorite spot. They let us pass and reach the descending staircase on the other side that seem to arrive in... the toilets! A dozen of little cabins with a family name written on most of them with a sharpy were standing at what looked like the back of a village. In front of us a line of backdoors of what looked like fishermen's home. The path was leading in between two of these buildings. Hoping we were not intruding into anyone's backyard, we used our most polite Spanish to greet the house's inhabitants and ended on a fisherman's beach. Little houses were literally taking the entire beachfront. In front of each house, a panga was tied, half in the water, half in the sand, with the line all the way up to the house. Some fishermen were getting ready to cast off, others standing in the shaded our chatting at the door steps, two kids were playing in the water. It did feel like intruding their privacy but everyone returned our 'ola, buenas tardes' in a rather friendly way. From now, the path lead to a concrete volleyball field that only seemed used for the 'bird Olympics' according to Yalçın. On the side, concrete building looked like abandoned kitchen with a stove and probably a former dinning space. That may have been part of the research station. A bigger concrete building, all open as well, might have been the core of the research station. It was now displaying fish rodes, a couple of tents with people sleeping in them (once again it felt a little like intruding), provisions and official banners describing the missions of the National Park, established in 2009. These and aged signs about the wildlife that we'd seen along the trail were the only clues of an endeavor that seemed now to belong to the past. Of course, we may not realize what Isla Isabel would look like today if it had been protected by its National Park status, but the investment on the field seemed very minor. It just looked like other islands we had seen in Baja that had a fisherman village. There were no rangers, no information about the place really. I don't really know what justified the pricey permit to come here really and that nobody really seemed to care about anyway. It sounded pretty much like a gringo scam.

Past the former research building, we found a little beach surrounded by rocks which offered a welcome share to rest and refresh before the way back. Frigates were still flying by and boobies seemed to like the rocks.

Once a little refreshed, we started our hike back: first, back to the fishermen camp who showed us which gap in between houses was the "street" to take to go back to the trail, then the red iguana staircase, the trail by the lake, then in the trees with the nest, then to the North seaside. Yalçın had promised that the way back would be shorter, apparently according to some Turkish saying, and he was right. The ketch that had shared anchorage with us was sailing past headed West, surprising. We kept going back, leaving to our left the bush of young frigates and making a small detour to get around two young boobies that seemed a little lost. Back on the beach, we enjoyed a welcome dip in the water that was already warmer than the Sea of Cortez. We then paddled back to Tirb which was swinging happily on his anchor. Soon some fishermen arrived and anchored by us where the frigates had already started their meal. With the fishermen around, seagulls took over begging for leftovers. On our end, we were getting ready to set off once more to a new destination at dawn the next morning.

In Isla Isabel from Friday, May 7th to Sunday, May 9th in the morning