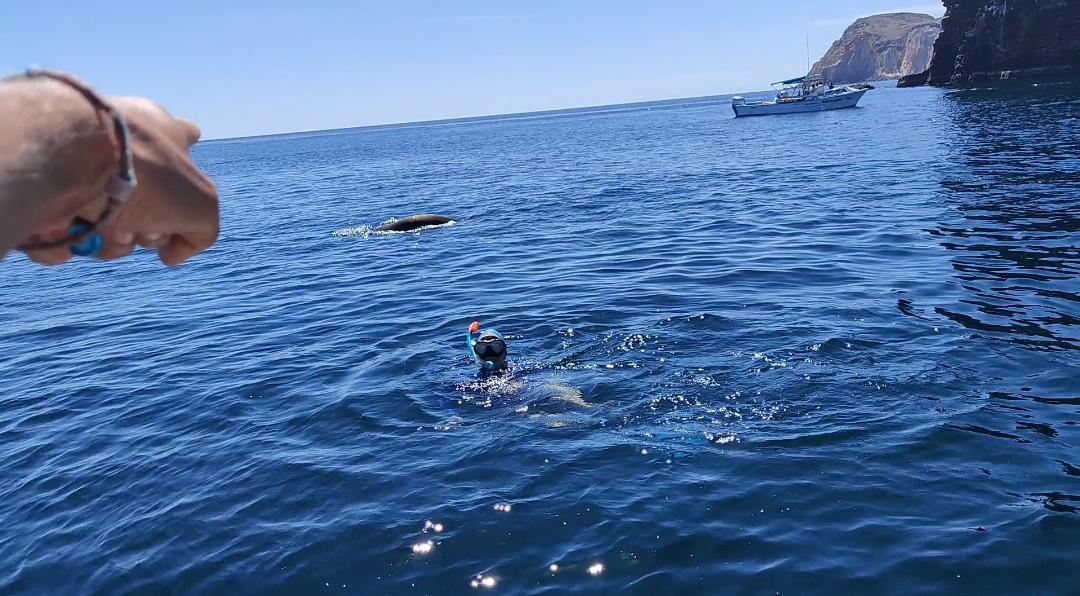 This morning, we did something that we rarely do, set an alarm! 8AM. We had a busy program. This lovely anchorage that we had to ourselves for the night was even more lovely that it was a strategic point to see the Islotes, two rocky little islands off the North tip of Isla Partida. And these Islotes were supposed to be inhabited by a colony of friendly sea lions, accustomed to swimming with humans in the water.

Would we be too scared to swim with human-size sea mammals?

We weren't sure either. And the information was coming from Navionics reviews as old as 2015. The sea lions could also have moved on altogether as well, we didn't know. But the islands looked pretty when we sailed into our cove yesterday and the dinghy ride was only a mile or so. After a quick breakfast, we splashed Bouchon, tossed the snorkeling equipment and the paddles in, attached Freddy the engine, even took the gas tank to make sure we wouldn't run out, and off we went.

The sight of the cliffs of Partida island was beautiful and soon, Tire-Bouchon disappeared in his cove. We saw a first panga (they transport tourists around here) try to duck in "our" cove but they went out right away, possibly disappointed that the spot was taken - or at least, that's what we thought. Later on, a second tourist panga emerged and tied to one of the Islotes mooring balls. Conveniently, we had read that these mooring balls could be used by any small boat wanting to experience the place. So we had tied up too and were studying the place. Judging by the noise, the sea lions were still there, and the presence of the panga was suggesting the same. And here there were, lazily resting on the lower rocks in between the islands, sometimes diving in. A group of three-four people was getting ready to jump in from the panga, so we figured we'd wait and see how they'd approach the situation, relying on the pangista giving them the pro advice. However, they were taking their time and a couple of sea lions were already coming by as if to check the dinghy. So, in an act of bravery, I decided to go before them and check it out. Yalçın would stay on the dinghy for now in case something went wrong. Reasonable bravery... The real act of bravery though, for me, was to actually enter the water (I'm notoriously slow at it), but once in, I started swimming to the rocks. The snorkel was breathtaking, schools of little fish swimming with a variety of larger fish. The usuals and some new ones that I hadn't seen before. They didn't seem afraid at all, they would swim by me, circle me, like a camouflage of fish as Yalçın put it after he dove too later on. My mind was absent though, I was focused on the big guys! One of the reviews mentioned that as soon as they jumped off their dinghy, after a couple of rollings, the sea lions came by to play with them. Where were they? I had tried some tumbles by the dinghy but nobody had come. Now I was swimming with so many fish that I felt they wouldn't notice me, or worst they might come to take a bite and I'd be on the way? See, half excited, half nervous, but in da place!

I don't know if I tried tumbling again or how it happened exactly, but all at a sudden, it was there. The big mammal swam towards me and I saw it coming close. Half scared (we are not that used to seing mammals as big as us, in their own environment), I tried to dodge or at least to rotate not to show my back (a sort of reflex). My movements with the fins were messy, so contrasted with the grace and agility of the sea creature. It stopped for a moment to observe me from below, and then went away. When I say a moment, it probably all went quite fast. I popped out of the water immediately to tell Yalçın, which probably sounded like a inaudible "blurp blurp blurp" with my snorkel still half in my mouth.

Anyway, the situation seemed safe and the other panga people were in the water trying to do more or less the same thing as we were doing, so Yalçın joined. We swam together upwind of the dinghy (you never know), his breath also taken away by the quantity of fish. Then he got his encounter too. After seeing a sea lion from afar, a curious one came closer to him, it looked, circled around him and stopped again to make an eye contact! Amazing! I saw a couple more from afar, but none seemed to want to play and swim with us for a while, as I had fantasized from the review.

We went back to the dinghy and spent the rest of the morning looking at them and trying to reproduce these moments. We went around the Islotes as most of the playing action seemed to be happening on the other side. The panga that had bailed from Tire-Bouchon's cove and that had disappeared from our sight after that, was well-hidden behind the rocks with others pangas, divers and snorkelers. It was sea lions playground. Groups of five to tens were swimming in pack, jumping above one another and sometimes entirely out of the water. The dinghy attracted a group, they swam by back and forth and we could see them clearly through the water. That was my chance, I jumped in again several times, most of the time a little too late after their passage. Tumbling and acrobatics on my end seemed to attract one occasionally though, I could see them arrive fast, look at me and then swim away. We saw many from in and out the water. They were so agile, gracious and playful, but each time they came, because I was trying to imitate (to my extend) their acrobatics, they seemed to leave disappointed.

That day, I learnt that I am not a fun sea lion to hang out with (what a surprise!) and that it is tiring to try! Still happy about our morning visit, we dinghied back to Tirb who was quietly waiting for us in his private cove, which wasn't so private anymore as a panga was anchored by the beach. But the day was not over. Yalçın caught up with water time as he decided to give a "quick" rub to the bottom (there is no such thing, it always take forever!) while I fixed up some well-earned lunch. We then prepared the boat as we had sailing plans to reach San Francisco island today. According to the forecast, between 2 and 3PM would be a good time to cast off, but I managed to squeeze in a last snorkel in this pretty bay right before we lift the hook. It had taken us some time to appreciate the wonders of the Espiritu Santos archipelago, but we had come to love this place and we were now kind of sad to leave it behind. Luckily, wind was blowing and we were bound to San Francisco, what could go wrong?