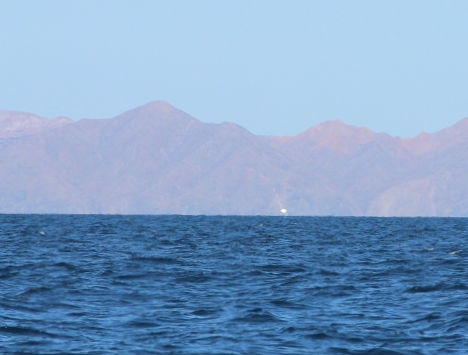 During the Sea of Cortez crossing, we had time. Plenty of time to look back and try to understand what is coming next. This crossing is already putting us back to a more sustained sailing mode. A mode that we had forgotten during our slower-paced cruising time in the Sea of Cortez. In the Sea, we had taken the time to make a detour out of our frenetic race to the South, to Panama, before the hurricane season. That race, we had felt it for several months and even maybe several years as we knew my visa would expire and leave us only one month to leave the US lawfully. That also meant a race to prepare the boat while working full time to make Tire-Bouchon ready to be both our home and means of transportation for such a long voyage, to make him a sea worthy comfy boat. Once that visa grace period of 30 days started, it took us two weeks to be ready to leave the Berkeley marina and another two weeks to make it down the coast of the US California: a race where we hammered down the coast as fast as we could, mostly motoring between winter storms. On the last day of my visa grace period, we crossed the border to Mexico. This is what we call 'efficient timing'!!!

From there, we stalled for one month in Ensenada, enough time to sort out our immigration, get used to life in Mexico, enjoy life without a stressful deadline... Which was basically an illusion! There is no such thing even in a vacation world where you are sailing your own boat. If there are no human deadlines, there are Earth dictated deadlines (and insurance dictated as well!) and we had to reach Southern latitudes by the summer as I mentioned earlier. That deadline ended up finally hitting us and we managed to break free of our dock lines again with an impression of having wasted too much time.

We went down the Baja Pacific Coast in another two weeks with wonderful winds. At the exception of the very beginning where we had to motor a bit to escape some Southerly strong winds, we basically sailed downwind with a steady 15 to 20 knots that carried us at more than 5 knots. A breeze and also a good way to spoil us for further down the road! Part of the frustration I felt during the crossing came from the low wind and the low speed we were making. Not only a racer's concern but also a matter of comfort. When the boat is moving nicely the rocking motion of the swell is relatively less important and less felt by the crew, unless, of course, the swell is larger too. About comfort and sea sickness, the situation had only improved from Berkeley and after Ensenada in particular. We had started our anchoring career by pretty small sails in between fair weather anchorages and difficult nights in the ocean swell had prepared us for anything slightly more comfortable that we would find down the road. I got to miss the long day sails or overnights that were our routine in Baja. So much time to think, write or just relax, already achieving your purpose of moving to the next destination without any pressure to do anything else, out of time. What felt like a race against time in the beginning had soon become an appreciable new rythme.

That rythme changed when we reach Cabo San Lucas and spend 5 days there with internet and the comfort of a town at our disposal. Big change: the temperatures had become more summer like and swiming was now an option. An option that we abused as we moved North into the Sea of Cortez. We would spend about a week to reach La Paz warming up to the vibe of our new environment (not much wind, swimming and snorkeling) and another three weeks in and around La Paz. It was our first big city since Ensenada and we took our time to take care of some boat work, get parts and simply replenish and clean the boat. We also escaped for a few days to the nearby anchorages which finished to accustom us to the Coromuel night winds and the calm rest of day, the characteristic landscapes, the snorkeling and more generally the cruising lifestyle. It was mid April by then, three months after we left Berkeley.

We were not quite accustomed to the cruising lifestyle if I'm honest when we took off for a long week in the National Park islands off the coast: Isla Espiritu Santos, Isla Partida and Isla San Francisco. The lack of wind and the heat made it seem pointless at first, but as we progressed up North, we liked it more and more. We discovered the abundant sealife of sea turtles, manta rays, colorful reef fish and jumping fish and we enjoyed the natural pace of island hoping, kayaking and snorkeling, as well as the duty of cleaning the bottom of Tire-Bouchon that was getting its share of the local ecosystem. Joke aside, I will remember this week long cruising for a long time as one of our most fantastic time in Mexico.

But this week, and perhaps this entire month in the Sea of Cortez, far from the ocean swell and without much sailing, had broken our grove so hardly acquired in the Pacific. After one month and one week of pause, we resumed our race South at the end of April with two months to sail down the coast of mainland Mexico, get our sealegs and seaworthiness back, check out of the country in times of Covid, cross from the last port of Mexico to Costa Rica bypassing Guatemala, El Salvador, Honduras and Nicaragua and finally meet our friends, the same friends that came with us for our very first night at anchor at the beginning of the trip mid January in the Bay Area.

This picture is the one manta ray jump that Yalçın managed to capture during the crossing of the Sea of Cortez.