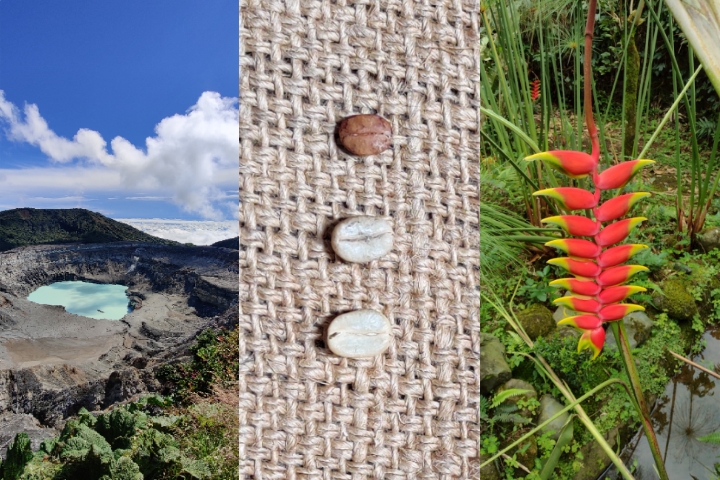 We had set Tire-Bouchon in his slip for the coming month and Yalçın was leaving in 3 days. With Covid, we had opted for renting a car to drop him off in San Jose for his flight and using this as an opportunity to explore inland Costa Rica for a couple of days. This time (while dropping him off), we would explore the Central Valley around San Jose, the capital, and our hope was to explore the North, including the Monteverde area while picking him up from the airport in 10 days (spoiler: that's not what is going to happen!). This time, our program was volcanos and coffee plantations, as well as Indian food that we found was available in Costa Rica's capital and that we hadn't encountered since leaving the US and that we were craving for.

The drive was a joy, driving a manual car again for the first time in years now. We chose the slightly longer toll-less road and arrived in San Jose in the afternoon rain. We went straight to the airport for Yalçın to get tested for COVID-19, a prerequisite for him to set foot on the American soil in a few days. His upset nose was rewarded with the flavors of Indian butter chicken, which brought us back to evenings on my deck in Berkeley.

Our guidebook warned us: you should arrive early to see the crater of Volcan Poas! As early as possible to skip horde of tourists and most importantly the clouds that obscure the crater even before the tourist buses arrive at 10 or so. So we booked our tickets online the day before, prayed that the bad Trip Advisor reviews saying we would only get 20 minutes with our expensive park tickets were outdated and woke up early. The rumors were true, the majority of the park was closed due to volcanic activity in the recent years, the hikes we were hoping for were unavailable and we would only be allowed 20 minutes at the crater after a short video about the history of the Park (in Spanish with French subtitles!). Hiking the short walk to the crater we were still debating whether the trip was worth it or not... The view on the crater was impressive, independently of the answer to that question. We are used to be exposed to the forces of Mother Nature, but volcanos are of the kind we aren't used to: the fumes and roaring sounds made an impression and the scenery was stunning. To add to the majesty, clouds started rolling in as forecasted as we (slightly!) overstayed our 20 minutes, making the lunar landscape even more mysterious. We eventually got reminded of the schedule, left the site and extended our stay in the souvenir shop where we were allowed indefinitely it seemed...

With more time left in our exploration day than we expected, we had plenty of time for the other activity we wanted to do: visit a coffee plantation. A large amount of the coffee that we get internationally comes from Costa Rica, and the Central Valley where we were, is full of coffee fields. And some plantations welcome visitors for instructional tours about the whole coffee production process. The Doka Coffee plantation that we chose for our tour was branded as the oldest coffee plantation that uses a watermill (which sounded a little mysterious at the time) and had pretty good reviews in our guidebook and online, so we went for it. On the property, there were also gardens to visit, a butterfly and a bonzai garden. Since we had half an hour or so before the start of the coffee tour, we went to the bonzai garden that was just opening. A little greenhouse sheltered around 30 or so of the little trees. We were wandering in the alleys, not exactly sure what to look at, when the bonzai caretaker started explaining how he works the trees, the principles of bonzai art, the tree species and their similarities amongst one another and with the actually tree. It transformed the visit and gave us a glimpse in the universe of dedication that is bonzai mastery. He knew each and every tree, was giving them shape with little cupper wires and had compositions inspired by nature. The explanations were fascinating but we had to cut short as the time of our coffee tour was approaching. People were already gathering at the meeting point when we arrived... a lot of people! We arrived last and the tour departed soon after, but the guide told us to wait for another guide who would be showing up in 5 minutes. And just like that, instead of visiting in a group of twenty or so, we started the tour with one guide for the two of us, joined 5 minutes later by a family, but still, sometimes being late (or not too early) has advantages (or were they a tour group who came all together by bus?)! The tour really picked our interest as I must admit, we didn't know much about coffee production. Our guide explained the cycle of the coffee plant, how to grow it from the seed, how they need to be renewed every 20 years and how the coffee berries are carefully picked when they turn from green to red by Nicaraguan workers that come for 5 months every year just for picking. We then moved to where the coffee is processed and that's where the watermill comes in the game: all the machines used for sorting, peeling off the berry envelop, fermenting and drying are actuated by the same axle, which rotates thanks to the watermill. We got explanation on the ingenious sorting and peeling purely mechanical process, the different qualities and flavor that come out of the different processes. Even if, when I write this article one month and a half later, I regret not writing all the details sooner to remember way more today, it was very insightful. We came home with a bag of Three generation coffee, the brand that is sold locally, and coffee beans in white chocolate that didn't last as long... Starving by that point, we quickly went to the butterfly garden where the inhabitants seemed to want to escape or were sadly feeding on rotten bananas. Even with the pretty colors of the butterflies, the place had some gloom to it. The tropical plants that populated it were colorful and gorgeous though. We then left Doka and drove almost half of the way back to the volcano to find a restaurant with outdoor sitting (Freddo's place!) and even dared to try the Pecado, the house desert with bananas, strawberry syrup and cheese on top. With a little style of künefe*, it convinced us. By then the torrential rain of the afternoon had started and driving became close to boating at times. It ended our day early after a grocery shopping mission at Automercado, the Wholes Food kind of store where we were able to find international items like pesto and Yalçın's favorite Mexican sauce, and where I would come back for produce the next before driving back to Puntarenas after dropping Yalçın off at the airport for his US trip.